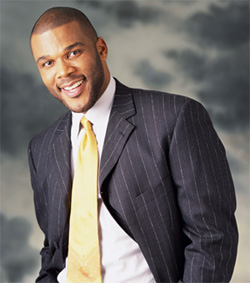 There is a lot of criticism surrounding Tyler Perry, but I am completely inspired by him for many reasons.  I think he’s the perfect example of success against all odds.  He exudes immense amounts of excellence and pride and he possesses an incredible drive that is only seen in the greatest people of our time.

I will admit that some of his productions, be it TV, movies, or plays can be a bit corny at times.  Although I love most of his work, that is my honest opinion.  But you know what, so what!  I put that out there to show that people’s opinions do not matter in the grand scheme of things.  Everything is not for everyone and there will always be someone who has a problem with something.  If Tyler Perry let people’s opinions stop him, he would not be where he is today.  And truth be told, most of the negative opinions about him come from people who couldn’t even fathom half of the success he has.

Success begins within.  You first have to dream big, to be big.  Tyler Perry is huge on the inside.  By that I mean he believes enough in his message, inspirations, and dreams to continue to manifest success through them in his life.

His message is one of faith, love, and hope to those who may not always experience them.  As described in the video mentioned below, he uses images that speak to all facets (favorable and unfavorable) of the black community.  His intention is to reach them where they are and share a positive message in hopes of shedding light into their lives.  I think it’s important that all people, no matter who or where they are in life, get the opportunity to be lifted up, encouraged, and inspired.  So bravo to Tyler Perry for using his own unique creativity to implement such a powerful intent.

His inspirations are his mom and his faith in a higher power.  In a time of turmoil and abuse during his childhood, he found solace in God.  Simply having faith in a God that was more powerful than the worst of his situations brought him hope and a sense of peace.  He aims to share this very concept in all of his productions.  He shares this concept the best way he knows how.  After hearing Oprah say that writing is cathartic (meaning healing or purifying of emotions), he began to write out a lot of the pain from his childhood.  This was the start of his plays that eventually grew into his empire.

Many times his productions seem to be geared toward a troubled woman who finds strength, happiness, and peace in the end.  He stated, in an interview with Oprah, that he realized he was writing to his mom.  His mother was also abused by his father.  So when it came time for his own personal healing, he took the opportunity to also rewrite his mom’s story.  That is incredible.  For me, learning the story and seeing the inspiration behind the genius gives me even more respect for such a great man.

His dreams, I presume, are to inspire the world, starting with his community.  Judging by his success, he is well on his way.  That is the beauty of success, it allows your light to shine brighter and further than ever before.

In my opinion, Tyler Perry’s success is attributed to all of these internal jewels, not to mention his unstoppable drive.  As you will see in the video below, he made his own way in the entertainment industry.  He never let “No” stop him, nor did he let his troubled past or debilitating circumstances hinder his progression.  He was determined not only to succeed but to present his work in its most authentic expression.  His persistence to move forward in truth and excellence is proof that he is driven toward greatness.

I am personally grateful for such an empowering example as Tyler Perry.  Not only does his work inspire, but who he is ignites a passion within me and many others to just be better.

So in this month of celebrating Black History, I felt it mandatory to spotlight the greatness that is, Tyler Perry.

As previously mentioned, click HERE to watch a story on him by 60 Minutes.  You can also click on the highlighted and underlined phrases above to see more videos on his experiences.

**In honor of Black History Month, also check out my Song of the Week by Donny Hathaway**